Prospecting and structural mapping of the newly interpreted extension of the Huronian Shear Zone has resulted in a grab sample assaying 15.7 g/t Au hosted in a quartz veined sheared volcanic rock.

Michael Thompson, P.Geo., President and CEO commented, “We are significantly pleased with this new discovery.  The newly interpreted extension of the Huronian Zone opens up a great deal of prospective undrilled strike length. This zone, along with the Trench 2 and Fisher zone splays, makes a high priority target.  Trenching crews have been mobilized to the area, the results of which will aid in drill targeting in the future”.

The Huronian Gold Project consists of 154 unpatented mining claims and four patented mining claims for a total land package of 5,200 hectares. The project is situated in the highly prolific Shebandowan Greenstone Belt located in the Abitibi-Wawa Subprovince approximately 100 km west of Thunder Bay, Ontario along major transportation and power routes.

Michael Thompson, P. Geo., President and CEO of Kesselrun, is the Qualified Person responsible for the project as defined by National Instrument 43-101 and has approved the technical information in this news release. 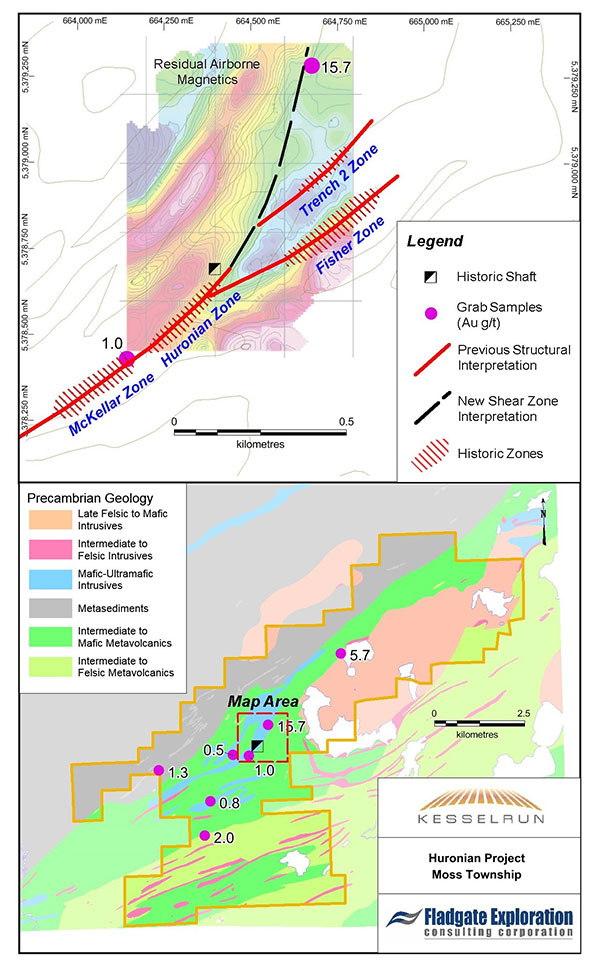 Kesselrun has implemented a quality control program for the trench sampling and planned drill program to ensure best practice in sampling and analysis. The planning, execution and monitoring of Kesselrun's quality control programs are under the supervision of Michael Thompson, P. Geo.  Kesselrun maintains strict quality assurance/quality control protocols including the systematic insertion of certified standard reference and blank materials into each sample batch. Analyses in this release were performed by Activation Laboratories Ltd. (Actlabs) of Thunder Bay, Ontario with ISO 17025 accreditation. Samples are transported in security sealed bags to Accurassay and all samples were analyzed using industry-standard techniques. Gold was analyzed by a standard 50 gram fire assay with an AAS and a gravimetric finish on samples greater than 5 g/t.

Forward Looking Statements – Certain information set forth in this news release may contain forward-looking statements that involve substantial known and unknown risks and uncertainties. These forward-looking statements are subject to numerous risks and uncertainties, certain of which are beyond the control of Kesselrun, including, but not limited to the impact of general economic conditions, industry conditions, volatility of commodity prices, dependence upon regulatory approvals, the execution of definitive documentation, the availability of financing and exploration risk. Readers are cautioned that the assumptions used in the preparation of such information, although considered reasonable at the time of preparation, may prove to be imprecise and, as such, undue reliance should not be placed on forward-looking statements.