THUNDER BAY, ON, January 12, 2023 – Kesselrun Resources Ltd. (TSXV:KES; OTCQB:KSSRF) (“Kesselrun” or the “Company”)  is pleased to share a review of the highlights and accomplishments of the 2022 exploration program on the Huronian Gold Project, including further drill results from the Fisher and Huronian Zones, as well as the outlook for 2023. 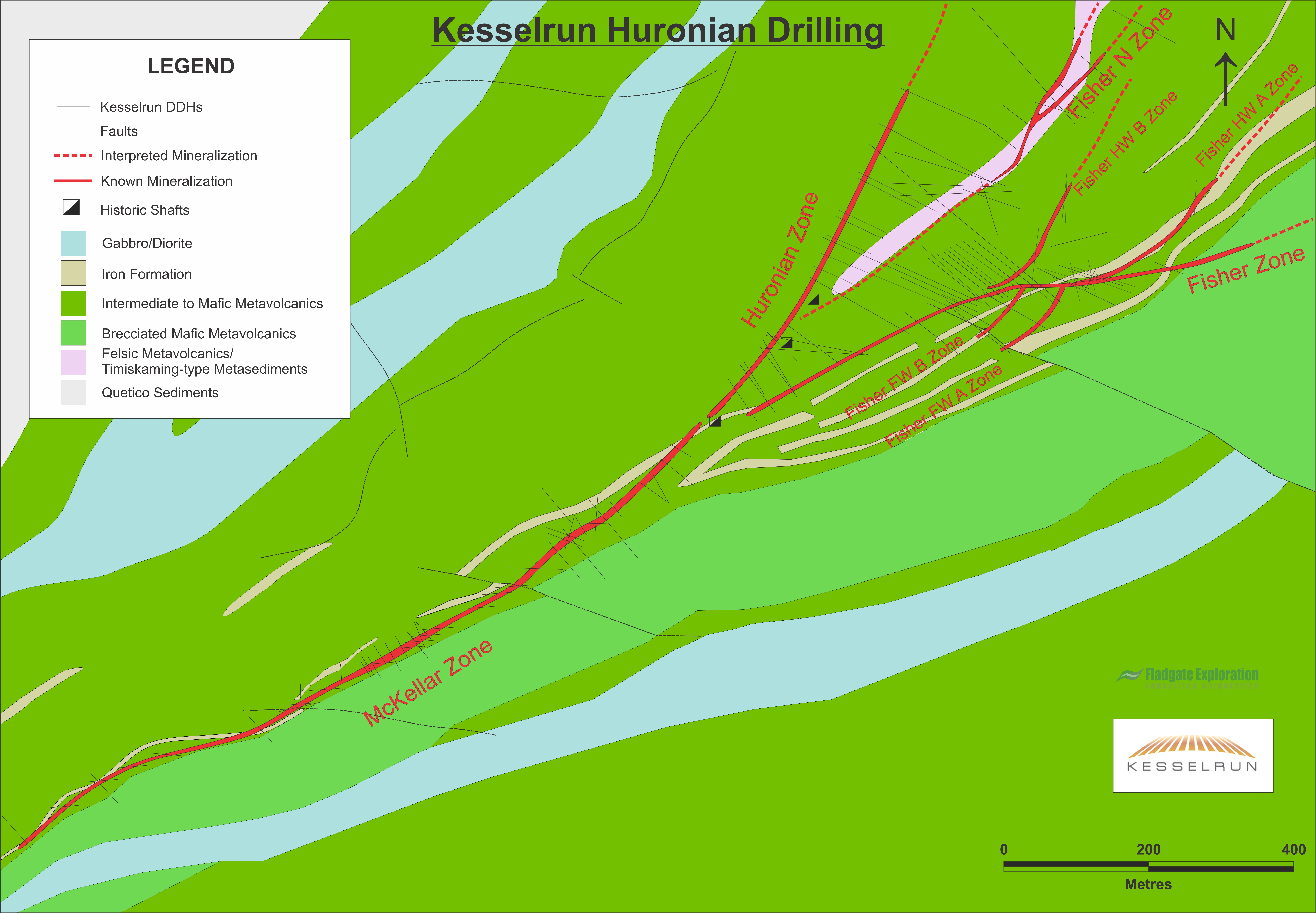 Exploration on Kesselrun's 100% owned Huronian Gold Project is focused on outlining and growing gold mineralization in the numerous known zones located in close proximity to the former producing Huronian Gold Mine as well as the discovery of new zones elsewhere on its underexplored and extensive 4600-hectare land package.

At the beginning of 2022, the Fisher Zone was modeled as a singular high-grade zone with a strike length of ~ 400 m and a depth of ~175 m. As a result of effective modeling and successful drilling, Kesselrun was able to identify multiple new high-grade zones on both the hanging-wall and foot-wall sides of the main zone as well as extend the main zone to a strike length of ~700 m and depth of ~250 m. A further twelve holes were drilled near the end of the 2022 exploration program testing strike extents of known zones as well as new targets within the Fisher area. Results are summarized in Table 2. below. 2023 planned drilling will test strike and depth extents of all Fisher area zones.

Kesselrun was successful in greatly extending the strike length of the McKellar Zone during 2022. At its furthest drilled holes to the west, the zone now has a total length of ~1200 m which doubled the 2021 zone strike length of 600 m. The McKellar zone has only been drilled to a depth of ~150 m leaving great potential at depth. As well, a further kilometre of strike length remains untested to the far southwest. Plans for 2023 will see further drilling to extend the McKellar Zone to depth, infill drilling and testing of the far southwest strike extents.

The Huronian Zone hosts the past producing Huronian Mine and its associated underground workings. Drilling amongst the workings has proved the zone still hosts significant unmined gold mineralization as well as giving a better understanding of the controls on mineralization which will be utilized to better target depth and strike extents on the zone in 2023. A further three holes were drilled near the end of the 2022 exploration program further testing areas within and near the historic underground workings. Results of those drill holes and a summary of significant drill intercepts on the Huronian Zone are summarized in Table 4. below. 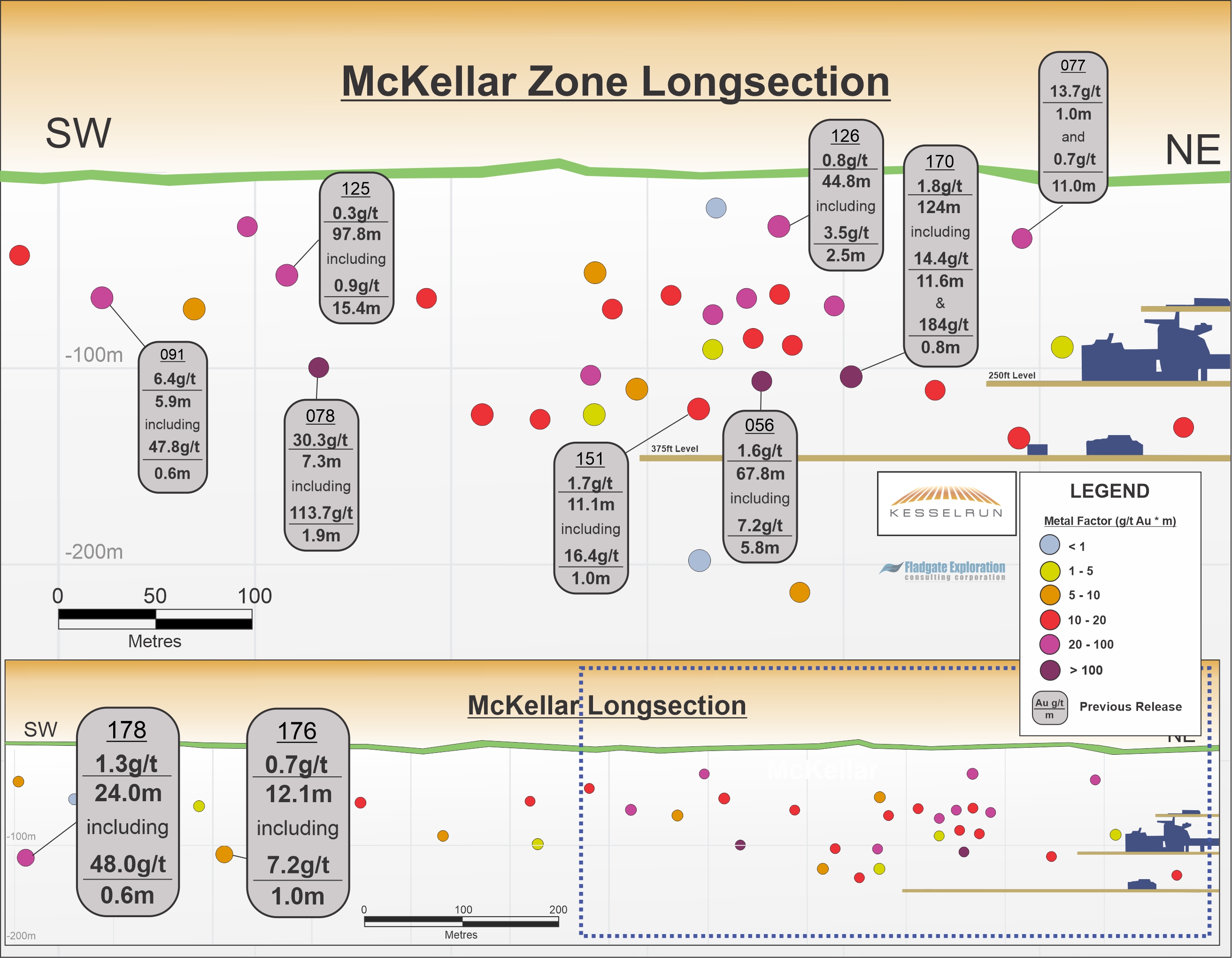 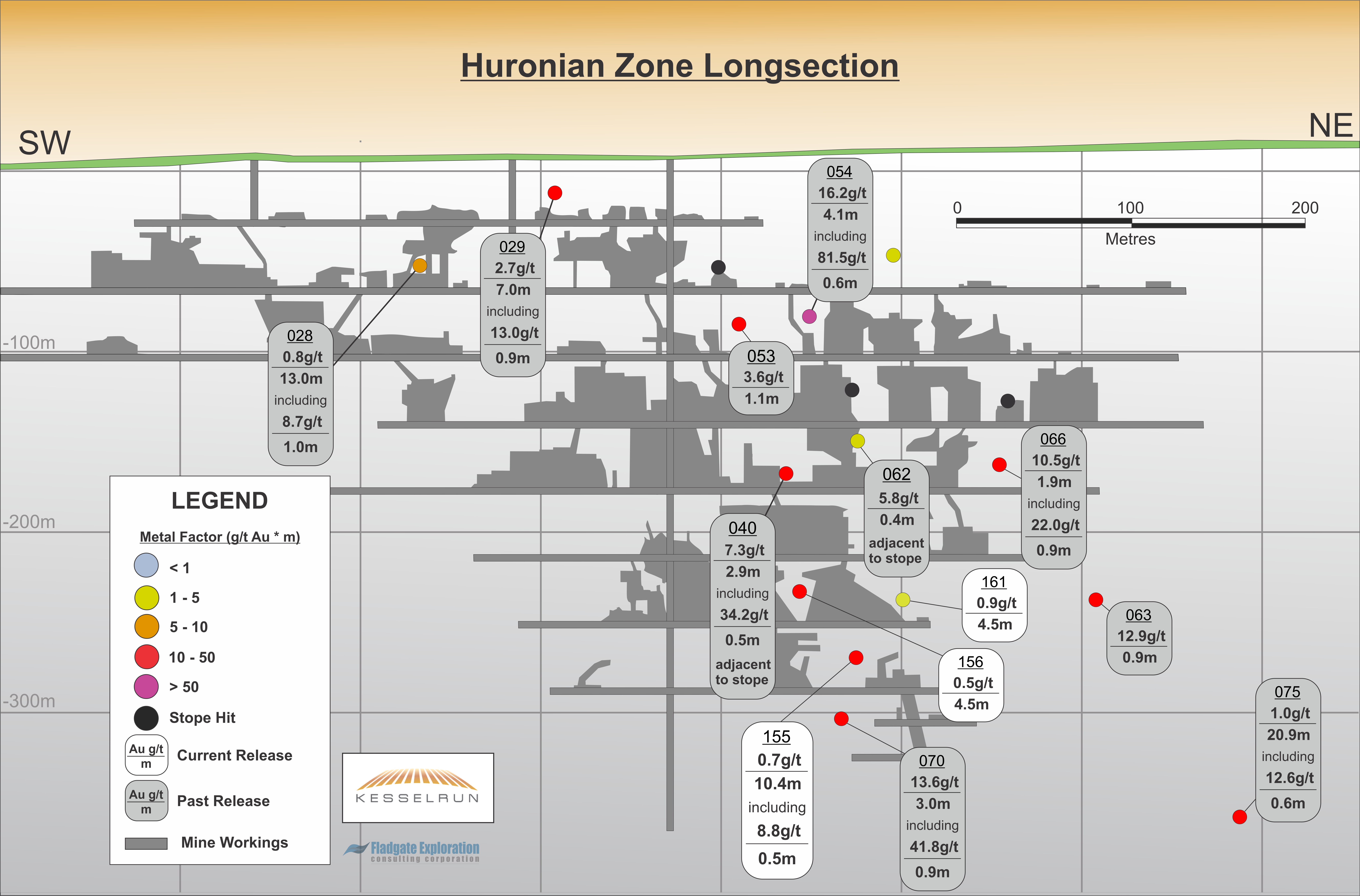 Kesselrun carried out a NuTEM and Magnetics geophysical survey in 2022 over the entire project area. In the Huronian Mine area the geophysics is expected to assist in identifying new zones of gold mineralization as well as extensions of known zones. In the southern portion of the project area, on strike from the adjacent Moss Lake Gold Project where outcrop exposure is below average, the geophysics, integrated with the reconnaissance drilling performed at the end of last year's program, will identify high priority targets and focus exploration efforts in 2023.

Michael Thompson, P.Geo., President and CEO of the Company, stated, "With over 36,000 metres drilled since kicking off our inaugural drill program in 2020 we have grown the footprint of the McKellar and Fisher Zones significantly while discovering multiple new zones within the Fisher area. The Huronian Zone has been shown to host significant remnant gold mineralization in the historically mined area and that the gold mineralization remains robust at depth and open down plunge. Much of the Huronian Gold Project area remains underexplored and the NuTEM/Magnetics survey and associated reconnaissance exploration initiated last year will assist the team in proving up the significant potential that we believe exists. 2023 will see Kesselrun advance the project to the next stage in what we believe will be a rising gold market."

About the Huronian Gold Project

As well, the Huronian Gold Project hosts the same lithological package of rocks, as interpreted from both Government of Ontario and Kesselrun Resources mapping, compilation and modelling, on strike from the adjacent Moss Lake Gold Project with an NI 43-101 complaint resource estimate of 4.17M oz Au at an average grade of 1.1 g/t Au in the inferred category (6). Mineralization hosted on adjacent and/or nearby properties is not necessarily indicative of mineralization hosted on Kesselrun Resources' property.

Michael Thompson, P.Geo., President and CEO of Kesselrun, is the Qualified Person responsible for the project as defined by National Instrument 43-101 and has approved the technical information in this news release.

Kesselrun has implemented a quality control program to comply with industry best practices for sampling, chain of custody and analyses. Certified gold reference standards, blanks and duplicates are inserted at the core processing site as part of the QA/QC program in addition to the control samples inserted by the lab. Samples are prepared and analyzed by Activation Laboratories in Thunder Bay. Samples are analyzed for gold using Fire Assay-AA techniques. Samples returning over 10 g/t gold are analyzed using Fire Assay-Gravimetric methods. Selected samples are also analyzed with a standard 1 kg metallic screen fire assay. All results reported herein have passed QA/QC protocols.

Certain information set forth in this news release may contain forward-looking statements that involve substantial known and unknown risks and uncertainties. These forward-looking statements are subject to numerous risks and uncertainties, certain of which are beyond the control of Kesselrun, including, but not limited to the impact of general economic conditions, industry conditions, volatility of commodity prices, dependence upon regulatory approvals, the execution of definitive documentation, the availability of financing and exploration risk. Readers are cautioned that the assumptions used in the preparation of such information, although considered reasonable at the time of preparation, may prove to be imprecise and, as such, undue reliance should not be placed on forward-looking statements.